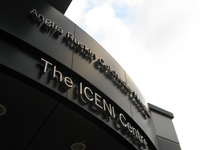 Mr Arulampalam has been working with colleagues both from Colchester Hospital and Anglia Ruskin University on the new ICENI Centre, which will be launched in early March 2011. He has been working on the operation aspects of the new joint venture and in particular developing a Masters programme in Minimally Invasive and Robotic Surgery as well as establishing an MD research programme. There are also key strands in the work looking at research for patient benefit. More news will be forthcoming from the new ICENI Centre

Mr Arulampalam has a well-established track record in the surgical and non-surgical management of colorectal cancer. He continues his work on the Medical Board of the national charity Beating Bowel Cancer. The next Board Meeting is in March. Preparations are underway for Bowel Cancer Awareness Month in April. There are a series of events to mark this month. Beating Bowel Cancer have raised awareness and are taking hold of the agenda. The charity has a Parliamentary voices event in the Houses of Commons, which Mr. Arulampalam has supported for many years.